How The Casual Style Appeared? 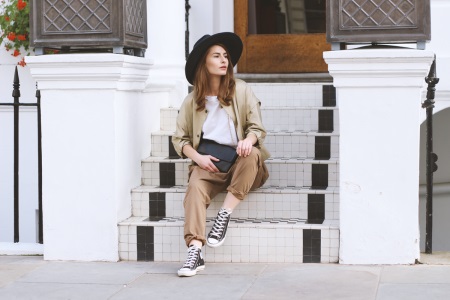 Casual, as we know it, is a moderately restrained and relaxed urban style of clothing. It combines comfort and elegance. Its key components are classic jeans, sweaters and jumpers. Also, basic shirts and t-shirts. In essence, the basis of this style is a conditional classic basic wardrobe. The only difference is that the casual wardrobe includes less formal items. Type: knitted vests and skirts, sports hoodies and loose dresses. And yet, the style is based on a certain formalism. By the way, if you want to buy great things, then follow the link to the Bershka website.

The prerequisites for the emergence of casual style can be considered the costumes of urban residents of the 1900-1910s. They consisted of practical skirts and light shirts, complemented by hats and comfortable accessories. To some extent, the style was popularized by suffragettes and subsequent feminist movements. They defended, among other things, the right of a woman to freedom of action, movement and comfortable clothing. Well, in the Bershka online store you can find both practical skirts and light blouses.

In the 1920s, largely thanks to Gabrielle Chanel, a simple yet sophisticated style of clothing became popular in the urban environment. He assumed convenience and democratic gloss. The general passion for sports and outdoor activities has strengthened the trending influence of casual style on society. The pre-war years and the years of the Second World War, with their harsh environment, dictated a trend towards super-practicality. So, even the most inventive fashionistas had a lot in common: jackets altered from men’s jackets, comfortable midi skirts and shoes with steady heels. This type of women’s clothing can be purchased at the Bershka online store.

But in the late 40s and 50s, the very casual image that we are so familiar with was formed. In the conditions of post-war economic growth and general recovery, young people were able to work for decent wages in prestigious companies. At the same time, they began to diligently build a solid, but not too polished image, imitating the well-to-do strata of society. Boys and girls did not want to shackle themselves, however, in tight suits that were in use before the war. They preferred to dilute the formality with slight negligence. London fashionistas who called themselves Teddy-boys were the first to achieve success in the art of casual styling. They inherited the lifestyle of the “golden youth”, but, unlike the first, they worked. In the appearance of the so-called Tedd’s, references to the fashion of the era of Edward 7 were guessed. For example, a trouser suit instead of a herring tie could be complemented by a bow tie or a western bolo tie. And instead of heavy cloth trousers, preference was given to light cotton ones.

Very quickly, the girls adopted the fashion from the guys. So, cropped elastic trousers and a neat shirt became one of the common urban bows. The new style was to the taste of young people. And soon, under the influence of fashionable moods, in 1958, a whole trend was born – fashion. In the arsenal of bourgeois mods, according to the established tradition, there were discreet things in the urban spirit, always of high quality.

The appearance of young people sometimes included elements of Preppy style and a light glamorous component. As a rule, this was achieved through seasoned colors, clean silhouettes and expensive textures. Fashions professed moderation and good taste. They put art, culture, artistry and intellect at the head of the development of modern man. So, girls could often be seen in black jumpers over modest skirts, and guys in jackets over turtlenecks. This gave them the appearance of mysterious and wealthy wise men. One of the cult images at the intersection of casual fashion and mod style is still the image of Audrey Hepburn in the movie “Funny Face”: black cropped pipes and modest golf. By the way, such images are very popular this season. And to create them you need high-quality clothes. it can be ordered in the Bershka online store.

In the 1970s, casual style began to take on shades and perceptible differences. The rampant glamorization of society has led to a trend towards luxury. Football, which is gaining new popularity, has led to a surge in fashion for a sports image. Formed such sub-styles as sport-casual and casual-chic. The trendy urban look was complemented by club jackets, polo shirts and sneakers. In the 1980s, when another wave of feminization was gaining momentum, a number of casual images were replenished with such a direction as business-casual. These are businesslike, emancipated women and girls. They preferred to wear loose suits, shirts and T-shirts in the manner of men, complementing them with strict accessories and shoes. Finally, in the 90s, the casual look became familiar to everyone and turned from a kind of statement into a mass phenomenon. In the future, casual sub-styles only developed each in its own direction. They have found expression in catwalk interpretations to this day.

This is a very diverse and deep direction. It looks like a constructor, where everyone contributes something of their own. And if you want to update your wardrobe and create a new look, then follow the link to the Bershka website. there you can order excellent, and most importantly, high-quality clothes.