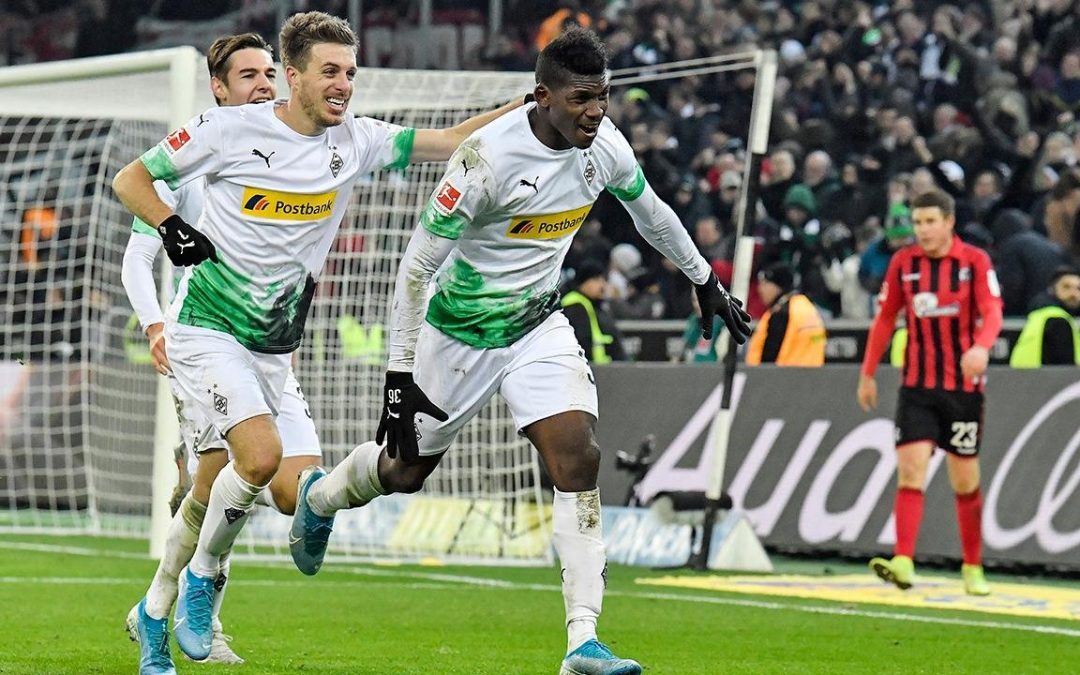 This story began in the summer of 1900. The young Gladbach footballers, who had left the Germany-1894 club a few months earlier, asked to be “under the wing” of the youth union at the Mariinsky Church. The leaders of the union, as befits good Christians, did not refuse and on August 1 they registered a new football branch – Fussballclub Borussia 1900. Since then, August 1, 1900 is considered the official date of the club’s foundation. In 1903 the club was admitted to the Rhenish-Westphalian Gaming Association.

Borussia won its first major success in the spring of 1912, when it won the A-class district competition and qualified for the top division, the Verband Liga Niederrhein. At the same time, the players from Mönchengladbach (that was the name of this city then) reached the final of the West German championship, in which they lost to Kölner BK, one of the ancestors of the current Cologne. In 1914, the De Kull sports facility was bought, on the site of which the legendary Bökelbergstadion was built in 1960.

Already after World War I, in 1920, Borussia, under unusual circumstances, made it to the all-German playoffs for the first time, becoming the champion of the West. A year before the events described, the club merged with Germany 1889 and became known as Verein für Leibesübungen 1889 M’Gladbach. The union will not last long, but it was he who managed to take revenge on Kölner by winning the decisive match – 3:1 in extra time! But at an earlier stage, the Gladbach team lost to some kind of “Düren” and should not have gone further, but the team that won them withdrew from the competition … In general, our heroes got out of their region for the first time and immediately ran into a very strong Furth – 0:7.

Gladbach could not repeat such a success again – both during the Weimar Republic and in the subsequent 30s of the 20th century. The brightest player of the club at that time was Heinz Dietgens, a worthy successor to the family tradition (his father was one of the founders of Borussia, and his uncle was the captain in the team that became the western vice-champion in 1912). 21-year-old defender Dietgens, an artist by profession, was called up to the national team before the start of the Berlin Olympics and, thus, became the first representative of Borussia in the national team. Otto Nertz was not even stopped by the fact that Borussia just flew out of the top division. During the war, Heinz would fight at Stalingrad; doctors will remove all the fingers of the football player, except for one, on frostbitten legs. But, having returned home, Dietgens will find the strength to return to football – in shoes specially designed for him, Heinz played for Borussia until 1948, and then worked as a team coach for some time.

Entry into the Bundesliga

On August 24, 1960, Borussia became the owner of their first national title – the German Cup, winning the final with a score of 3: 2 against SC Karlsruhe. On the way to the 1960 West German Cup final, the team defeated Victoria from Cologne, teammates from Dortmund, Cologne and the current national champion Hamburg with Uwe Seeler. In the decisive match on October 5, Karlsruhe was beaten with a score of 3: 2. The winning goal was scored by the leader of that Borussia team, Albert Bryuls.

A week later, Mönchengladbach was officially renamed Mönchengladbach by the authorities to avoid confusion with the Bavarian Munich. Changed, respectively, and the name of the football club. Meanwhile, Borussia got the opportunity to make their debut on the European arena.

The turning point in the history of the Mönchengladbach club is April 25, 1962. It was on this day that a local businessman, the owner of a textile factory, Helmut Beyer, took office as president of Borussia. Bayer’s namesake and longtime partner Helmut Grasshoff became manager under Bayer. They were just the kind of people who were missing from the board of the club for a very long time: smart, practical, able to squeeze the maximum out of the minimum. The “minimum” in this case was understood as the amount of money in the club. Borussia has always been a poor team, a lot of debts have accumulated, and the fans did not have to rely on high-profile transfers. At first, the financial situation was corrected by the record sale of Bryuls abroad. The Italian “Modena” laid out a quarter of a million Deutschmarks for Albert, a decent amount for those times. But it was necessary to somehow get out further. Beyer and Grasshoff did just that. The team was strengthened by young players from their own reserve or from nearby amateur teams. For example, these were: Jupp Heynckes, Lucas Rupp, Berti Vogts. Borussia were very lucky with Günter Netzer, who has been playing at the club since the age of nine. He has grown into a real star of the first magnitude, a great playmaker from the category of “one in a million”. It was also a great success to invite Hennes Weisweiler from Cologne to the post of head coach in 1964. On the appointment of Weisweiler, Grasshoff responded as follows: “We felt that if we change Langner (the previous team coach – I.S.), then only for someone of genius.” The boss wasn’t wrong.

June 26, 1965 was followed by access to, founded two years earlier, the professional top football league in Germany – the Bundesliga. Borussia Dortmund won the league matches after finishing first in the Regionalliga West. The second ticket to the Bundesliga in the same year was also played for the first time by Bayern Munich.

The 1970s were a “golden era” in the history of Borussia Mönchengladbach. From 1964 to 1975, Borussia was coached by Hönnes Weisweiler. This period was marked by a fierce struggle between Mönchengladbach and Bayern for supremacy in German football. Gladbach started out in the Bundesliga in the 1965-66 season, along with future record champions Bayern Munich. Bayern opened the scoring by becoming champions in the 1969 season. Borussia M struck back the following season (1970), and then won the next championship (1971), defending the title for the first time in the history of the Bundesliga.

However, in the 1974 season, Borussia, one point behind Bayern, allowed Munich to win three championships in a row for the first time. In that season, Borussia consoled themselves with a second DFB Cup, beating Cologne 2-1 in the final.

Borussia Mönchengladbach also achieved great success in the European arena. In 1977, after beating Dynamo Kyiv in the semi-finals with a total score of 2:1, for the first and only time, Gladbach reached the final of the Champions Cup. However, Borussia lost to Liverpool 3-1 in the final. Ironically, this final and the European Cup was the first for Liverpool, too.

Borussia In The 80s

In the 1978-79 season, Gladbach finished only 10th, which was regarded as a failure and led to the resignation of Udo Lattek. Jupp Heynckes coached Borussia from 1979 to 1987. Experiencing financial difficulties, Borussia was forced to sell the leading players. This led to a decline in the league. However, for most seasons in the 80s, Gladbach finished at the top of the standings. During these years, Gladbach twice took the bronze of the German championship, and in the 1983-84 season, he reached the final of the German Cup, where he lost to Bayern in the penalty shootout. It is curious that Lothar Matthäus did not score his penalty for Borussia, who will leave the team at the end of the season and sign a contract with Bayern.

In the 1986-87 season, Borussia player Uwe Rahn became the top scorer in the Bundesliga with 24 goals.

In the 2000s, Borussia did not shine with results. In seasons 1999-2000 and 2007-2008, Gladbach spent in the Second Bundesliga. But even when the team played in the Bundesliga, it lived in the basement of the standings, not rising above 10th place. In May 2006, the legendary Jupp Heynckes was appointed coach of Borussia for the second time, but the results were so deplorable that they forced Jupp Heynckes to resign on January 31, 2007. The team was relegated from the Bundesliga that season. Since 2009, Borussia Mönchengladbach have been playing in the Bundesliga. In the 2010-2011 season, Borussia hung in the balance from relegation to the Second Bundesliga. In February 2011, the team was introduced to a new coach – Lucien Favre, whose main task was to save Borussia from relegation to the lower division. The team managed to rise to 16th place and beat Bochum in the play-offs, which took third place in Bundesliga 2. Gladbach won the first match at home with a score of 1:0. Igor de Camargo scored a goal in stoppage time by the referee. After a 1-1 draw in the second leg, Borussia Mönchengladbach retained their place in the top division. However, in the 2011/2012 season, the team showed an unprecedented result, as for itself in recent years, taking 4th place at the end of the season. Naturally, having received the right to play in the third qualifying round of the Champions League. However, Borussia have their own recognizable style. Matches with her participation are always a performance that is remembered for a long time.

And to find out more detailed information about the club and buy various club merchandise, go to the Borussia Mönchengladbach website.